Who are we?
The California Phenology Network was originally an NSF-funded collaboration of 22 California herbaria that aimed to image 904,200 herbarium specimens by 2022. In July 2020, this network was expanded by a partner-to-existing-network grant to include six additional institutions and over 148,000 more specimens, for a total of over one million specimens. We will also georeference and transcribe over 320,000 specimens, making their data publicly available on our data portal. 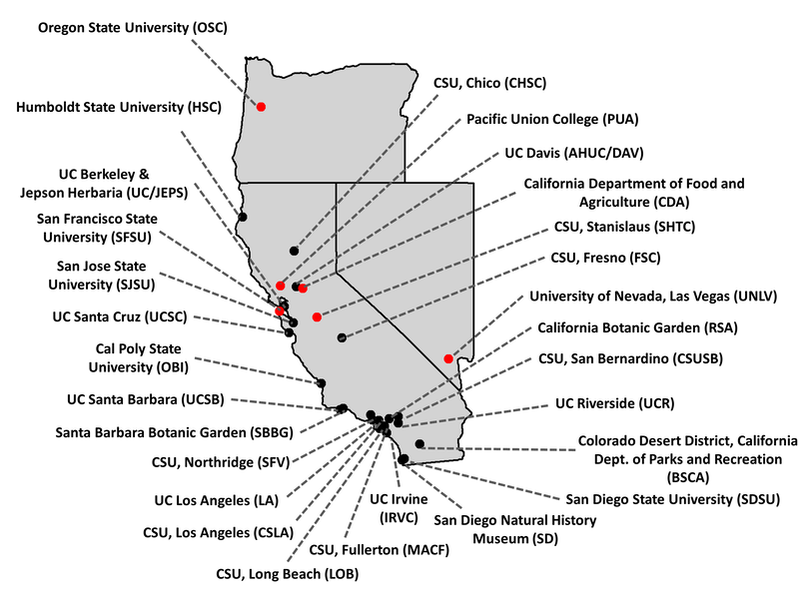 Partner institutions of the California Phenology Network. Red dots are those funded by the 2020 PEN grant.
Why do we do what we do? 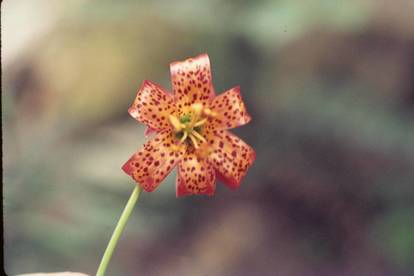 Lilium pardalinum subsp. pitkinense, an wildflower endemic to California. Image courtesy of: collections.nmnh.si.edu
California has the most diverse native flora of any state in the U.S., containing more than 1/3 of all U.S. plant species. The state is considered a biodiversity hotspot due to its high diversity, high endemism, and major threats. The state’s flora includes 7,400 terminal taxa (i.e., species, subspecies, varieties), of which 6,270 (85%) are native and 2331 (32%) are endemic. This diverse and highly endemic flora is also highly endangered. The all too familiar forces of habitat destruction and fragmentation, urban and suburban sprawl, and natural resource exploitation have impacted the state’s flora severely. The California Native Plant Society classifies about 1/3 of the state’s native species as taxa of special conservation concern. In this context, anthropogenic climate change poses a heightened threat to the California flora. The rising temperatures predicted by climate models are already being observed in California and will impact the state’s plants as many species must shift their ranges to the north and/or to higher elevation to find suitable habitat.
​
​​The digitization of herbarium specimens has advanced our ability to understand how organisms respond to changing conditions. However, when a digital record consists only of a taxon name, date, and location, we are limited in the types of research questions we can address. While label data such as these can be used to address changes in species distributions, high-resolution images of herbarium specimens add a rich source of additional information regarding plant health, reproductive condition, and morphology. High-resolution images allow researchers to access and make use of this information. Future digitization efforts will undoubtedly focus on capturing trait data from specimens, greatly expanding the use of specimens in research.

In the past decade, there have been massive international efforts to digitize herbarium records. In the U.S. there are now about 48 million digital herbarium records provided through iDigBio (Integrated Digitized Biocollections), about 30% of which are accompanied by images  (www.idigbio.org). However, fewer than 3% of California specimens have been imaged. The paucity of images greatly limits our ability to extract valuable data from collections. Nor can we predict the cascading effects of climate change on California’s delicate ecosystems. The goal of this project is to initiate a massive imaging effort that will increase our understanding of the direction and magnitude of phenological shifts of California’s flora. We will image, database and georeference (as needed), and score phenological traits on~900,000 specimens housed at 22 collaborating institutions. We are making significant changes to California’s digitization infrastructure that will add modern data curation tools and image serving capabilities. As community-wide data standards for scoring phenological traits from herbarium specimens are currently lacking, we are build on the work of other TCNs and collaborate with iDigBio and TDWG to create data standards for phenological traits. 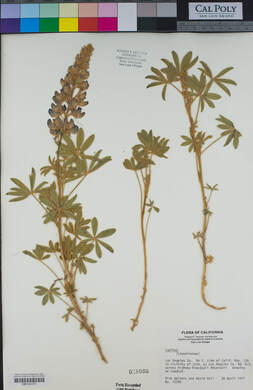 There are numerous ecosystem functions that depend on plant phenology—the timing of life-cycle events such as flowering—at multiple levels of biological organization from individuals to ecosystems, yet phenological data are rarely captured in digitization efforts. Phenology not only affects the individual fitness of plants but also the fitness of mutualistic and antagonistic organisms that depend on them, which in turn affects population level dynamics such as mating patterns, gene flow, and evolution. Temporal mismatches between plants and pollinators can quickly drive populations extinct, cause rapid evolutionary shifts, and can result in billions of dollars of agricultural losses. As climate change progresses, phenological overlap between plants and mutualistic and antagonistic organisms will change with unknown consequences. We know even less about how different functional groups of plants or their pollinators will respond to climate change. Specialist pollinators might face reduced floral resources, and generalist pollinators could be favored. Consequently, maximizing the use of herbarium specimens for phenological research is important not only to improve our understanding of ecological change, but to address practical environmental problems.

The use of herbarium specimens to track the relationship between local climatic conditions and the collection dates of flowering specimens has a relatively short history (see Willis et al., 2017 for a review of these studies). Nevertheless, several herbarium-based studies have succeeded in corroborating the link between phenological onset dates and local climate that was first observed in long-term, place-based studies, despite known biases of herbarium records. These studies have improved our understanding of the specific advantages of herbarium specimens for phenological research, such as filling gaps in long-term or observational data sets, either for a period of time or for underrepresented regions. However, none of these studies have focused on the California flora, despite it being the most endemic and imperiled flora in the U.S. By digitizing California’s earliest collections we will for the first time have long-term records of the phenological status of hundreds of thousands of specimens, some of which extend back to the late 1800s. We are targeting the oldest specimens (pre-1930) to establish a phenological baseline before the onset of anthropogenic climate change; the most diverse vascular plant families in California to understand the evolution of phenological shifts; and the taxa currently monitored by the USA National Phenology Network (USA-NPN) and the California Phenology Project (CPP), all of which render our digital data immediately applicable to on-going research. With these data, researchers will be able to generate an unprecedented picture of species- and phenophase-specific relationships between phenology and climate in California. With the data generated by this project, we will finally be able to answer questions such as: (1) Which species are in the most danger of phenological mismatches? (2) Which habitats and vegetation types are most phenologically sensitive to changes in winter precipitation and temperature? (3) Do evergreen vs. deciduous taxa differ qualitatively in their response to long-term changes in temperature, rainfall, and the combination of the two? (4) Where might mismatches occur between flowering plants/agricultural plants and their pollinators, pathogens, and pests? (5) Is pollinator specialization an evolutionary dead end?

The future of digitization efforts will focus on deriving trait-based data from specimen images beyond phenology as well. It is essential for the long-term sustainability of these data to have biodiversity data standards in place to facilitate data sharing and mobilization among institutions. This project will help to establish the framework for which trait-based data can be shared via Darwin Core Archives. In the future, trait-based data will allow researchers to detect evidence of the magnitude, direction, and outcome of selection on phenotypic traits and the resulting evolution of pollinators or antagonistic organisms. Sister species can be compared to understand trait divergence and patterns in the speciation process. In addition, images of specimens can be used to capture vital information about the geographic and temporal extent of pathogens and pests, as well as address fundamental issues of plant taxonomy.

The National Science Foundation award announcement can be found here: https://www.nsf.gov/awardsearch/showAward?AWD_ID=1802312
Check out our Progress!